Dedicated to the descendant families of Jerry & Stasia O'Brien.

Jeremiah (Jerry) O’Brien was born in the Glen of Aherlow on the 20th November 1901. Jeremiah’s parents were Jeremiah and Ellen (née Ryan) O’Brien. His grandparents on his father’s side were John and Bridget (née Buckley) O’Brien. All born in the glen of Aherlow, Co. Tipperary.

Jeremiah’s home was in the townland of Rossbog. His father’s house is still standing and is now called ‘Móin Oidhean’ by its current occupier William O’Brien.

Jeremiah Ryan, previously occupied this house and land of ‘one acre and fifteen perches’, from 1855 to around 1903. This I assume was the home of Ellen Ryan’s parents Jeremiah and Ellen Ryan.

Jerry was educated at Stonepark, National School (now a private residence) and later at Ardane, a good journey from Rossbog. He left school at around 14 years of age and found work on a neighbouring farm. He left the Butler’s farm and worked as a Dairy Man in the nearby creamery at Rossadrehid, not far from his home in Rossbog.

Rossadrehid was a busy little village and at the peak of the dairy season was packed with supplier’s donkey, pony and horse carts bringing milk for processing. Business was transacted at the local grocery shop, hardware store, forge or sawmill. For a period the creamery manufactured butter and cheese.

He also worked for a period for a timber contractor along with his father and brother.

In May of 1917, at the age of sixteen he joined the Volunteers and saw active service in Co. Tipperary up to March 1922.

Shortly after his election as a candidate for West Clare, Mr. de Valera addressed an enormous meeting in Tipperary town on 19th August 1917. The Volunteers acted as his bodyguard, they wore dark green uniforms and carried hurleys in defiance of a recent edict made by the British against the carrying of hurleys. It is possible that Jeremiah was there on the day, maybe not yet in uniform but would he have carried a Hurley?

He was later awarded the Service Medal for his service in the ‘War of Independence’ or the ‘Black and Tan War’ with “G” Company (Coy), 4th Battalion, Tipperary No 3 Brigade, of Óglaigh na hÉireann (the Old IRA).

His O/C in this unit was Morgan O’Brien of Glencushabinna a townland adjoining Rossbog and Stonepark. Despite its remoteness, Glencushabinna did not remain untouched by the Troubles. The O’Brien’s of Glencush played their part in the struggle for Irish Independence. After the ambush at Lisnagaul their houses were raided several times. Various members were arrested and detained in the Barracks in Tipperary town for a number of days. The best known of the participants was Morgan O’Brien, Captain of G Company of the Third Tipperary Brigade.

The South Tipperary Brigade was formed in the spring of 1918. Originally Dan Breen was elected Commandant in the absence of Séan Treacy who had been arrested for the second time on the 28th February 1918. At this time it was expected that the British Government would soon impose conscription in Ireland.

During 1918 the Volunteers made sham attacks on Tipperary town; certain roads were declared military areas; British soldiers, police and civilians were forbidden to enter these areas during the ‘operations’. A few hundred volunteers carried out these exercises. At the same time a garrison of about one thousand British soldiers occupied the town.

The armistice came on 11th November 1918 and with it the threat of conscription disappeared. The number of Volunteers diminished drastically, the only reason why some joined was to avoid the trenches. The small number that remained was committed to fighting for Irish Independence.

The records of the Department of Defence show in respect of Jeremiah O’Brien of the Civic Guards, George St., Wexford that he was awarded a pension under the provisions of the Military Service Pensions Act, 1924. He was awarded pension able service of 5 ½ years at the rank of private. The amount of the pension was £27.10s per annum.

From May 1921 until February 1922 Jeremiah held the rank of Sergeant in the Irish Republican Police during which time he rendered voluntary service.

On the 6th February 1922 he attended a Pro Treaty rally at the Mansion House in Dublin. He resigned from the IRA police and on the 29th May 1922 he enlisted at Beggars’ Bush Barracks with the The National Forces of Saorstát Éireann (Irish Free State). He joined the Corps of the Military Police and served in the Dublin, Athlone and Curragh commands.

On Jeremiah’s application for a Certificate of Military Service he made the following statement;

‘I beg to state that the Officers which I served under in the IRA are not in a position presently to vouch for my service. Least none of them who joined the Anti Government Forces. I am attaching copy of recommendation from Commandant Fraher received on my joining the Guards’.

He reached the rank of Corporal (Reg. No. 17292) in the National Army Military Police.

On the 16th of January he joined the Garda Síochána (Reg. No. 5516). Trained at the GHQ, Phoenix Part Depot and was sent to Wexford on the 5th June 1924. On his medical certificate he is described as being fit. His height is recorded at 5 feet 8 ½ inches.

He was stationed in Georges Street Garda Station in Wexford town from 5th June 1924 to 5th July 1927. 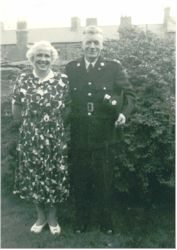 During this time he met and married a county Wexford girl, Anastasia Grannell of Ballina, Ballymurn, Enniscorthy. They married on the 21st June 1927. Anastasia was 20 and Jeremiah 26 years old when they went to Portlaoise. Jeremiah served in the Leix/Carlow division of the Garda Síochána until the 8th October 1936.

According to Jerry’s Garda Service record he took up his position with the Dublin Metropolitan Division in Dublin Castle on the 9th October 1936. This coincidently was Joe’s 6th birthday. He served in the Special Branch until 19th February 1942.

On the 9th February 1954 Jeremiah was promoted to Sergeant and on the 12th was sent to serve in Mountjoy Gárda Station.

Before Jerry went to Mountjoy three more additions had been made to the family all living at 82 Tyrconnell Park, Inchicore. They were Bríd born 22nd October 1945, Siobhán Bernadette born 29th May 1947 and Catherine Anne born 9th October 1949.

Jerry was on the move again when on the 11th January he was stationed in Chapelizod Garda Station. Here he remained until his retirement on the 31st July 1961. He total service amounted to 37 years and 197 days and his Service Record records a period of ‘Exemplary Service’.

He then worked as a Security Guard until 1970, mostly with C.I.E. 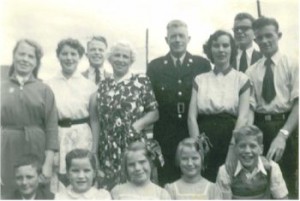 Far too many Sheahans over the last few years for my liking!